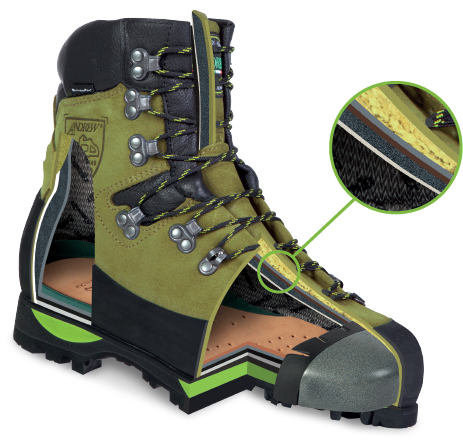 Shoes for professional use are considered Personal Protective Equipment (PPR). They are therefore subject to the requirements of EEC Directive 89/686 (as amended), implemented in Italy with Leg. Decree no 475/92 (as amended) – which requires affixing of the CE marking for their marketing.

Our safety shoes are Category III Personal Protective Equipment subject to CE Certification by RICOTEST Notified Body (certificate N. 0498), Via Tione 9 – 37010 Pastrengo VR – Italy. (www.ricotest.com), and subject to the type conformity assessment procedure based on internal production control together with product tests carried out under official control at periodic intervals (form C2) under the supervision of the RICOTEST notified body (no. 0498)

WARNING: As well as the basic requirements prescribed by this standard, the safety footwear must satisfy one of the following performance levels according to the speed of the saw used:

LEVEL 3: resistance with saw speed of 28 meters per second

Additional requirements: P = resistance to penetration of the sole of the footwear. The footwear is marked on the outside of the upper with the following pictogram: